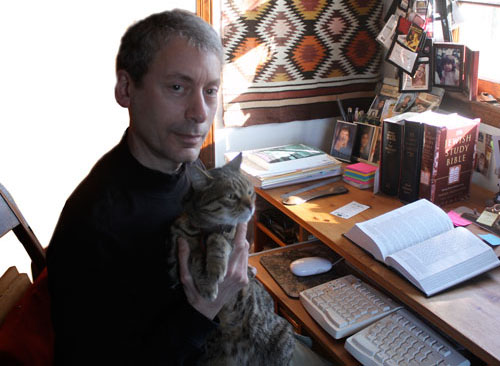 Kenneth Wishnia was born in Hanover, NH to a roving band of traveling academics. He earned a B.A. from Brown University (1982) and a Ph.D. in comparative literature from SUNY Stony Brook (1996). He teaches writing, literature and other deviant forms of thought at Suffolk Community College in Brentwood, Long Island, where he is a professor of English.

He is married to a wonderful Catholic woman from Ecuador, and they have two children who are completely insane.

Kenneth Wishnia’s novels include 23 Shades of Black, which was nominated for the Edgar Allan Poe Award for Best First Novel and an Anthony for Best Paperback Original; Soft Money, a Library Journal Best Mystery of the Year; and Red House, a Washington Post Book World “Rave” Book of the Year.

His novel, The Fifth Servant, was an Indie Notable selection, a Best Jewish Book of the Year according to the Association of Jewish Libraries and the Jewish Press, won a Premio Letterario ADEI-WIZO, and was a finalist for the Sue Feder Memorial Historical Mystery Award, a category of the Macavity Awards.

He recently edited the Anthony Award-nominated anthology, Jewish Noir. He teaches writing, literature and other deviant forms of thought at Suffolk Community College on Long Island.

“Wishnia’s brand of gritty surrealism jolts the reader with startling images and jarring contrasts. [He] evokes a country and a culture vividly and unforgettably.”